These days, all news in India is only about healthcare: heavy investments in healthcare, new apps for healthcare, new business models for healthcare and finally funding agencies with a mandate to fund basic and translational research coming forward to give away tax payer’s money generously to healthcare startups and established companies, but mental healthcare often remains, paradoxically, forgotten and ignored.

Alzheimer’s disease (AD) is the most common cause of Dementia. AD and other forms of dementia are a growing public health problem among the elderly in developing countries with aging population increasing rapidly. It is estimated that by the year 2020, approximately 70% of the world’s population aged 60 and above will be living in developing countries, with 14.2% in India.

I want the reader to know that AD although was reported in 1907 by Lois Alzheimer who characterized the disease as causing memory loss and cognitive impairment, till today, the disease is neither scientifically nor medically understood reflecting on the recent (2016) drug clinical trial failing (Eli Lilly). Like Cancers, Alzheimer’s disease is also a death sentence to the entire family of the patient and there is no reversal of the condition anytime killing more people than breast and prostate cancers combined.

In Feb’s Transcomm, we have Dr Sasidhar throwing light on the disease, stem cells as therapeutic tools to treat the disease, introducing stem cell derived Exosome Vesicles to treat AD. He practices exosomes research and his statements are straight from the lab data.

The biggest disease today is not AD or Cancers, but rather the feeling of being unwanted..

Wishing good health for everybody,

Dr. Sasidhar Manda is the Founder of Urvogelbio, Hyderabad, a startup developing exosome-based diagnostics and therapeutics in the area of CNS and oncology diseases. He leads the research division of Apollo Hospital Educational Research foundation (AHERF).

Pathologically, AD is described by accumulated beta-amyloid plaques, neurofibrillary tangles and neuro degeneration. Current AD therapies only offer symptomatic relief and do not cure the disease, though there are a number of marketed drugs approved for AD; this remains a significant area of unmet medical need. Despite substantial impetus in AD research, etiology of AD is unknown. Amyloid plaques and tau fibrils stand as significant molecular pointers of AD. But, existing strategies targeting amyloid or tau are unable to repair regeneration of already damaged neural tissues. There has been increasing demand to harness the potential of stem cells for disease modelling, drug discovery and therapy. Recently, Stem Cell therapy (SC therapy) has emerged as a potential player for neurodegenerative diseases including AD.

Embryonic stem cells (ESCs), induced pluripotent stem cells (iPSCs), and tissue-derived stem cells such as bone marrow (BM) and adipose derived stem cells are the major Stem cell candidates with a potential for AD therapy. Stem Cell therapy is believed to work through the following mechanisms including integration into the existing neural networks of the AD brain, increasing acetyl choline levels to improve cognition and memory, increasing neurotrophic factors to modulate neuroplasticity and neurogenesis and other mechanisms.ESCs are self-renewing, totipotent cells which have the capability to differentiate into neuron progenitor cells (NPCs), and these can result in a therapeutic effect when these cells are transplanted into AD animal models. Significant developments currently taking place in the area of AD research includes- 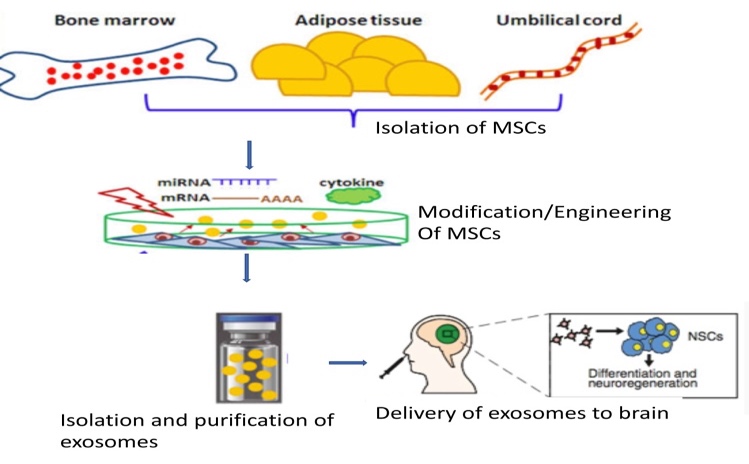 Safety and ethical concerns of stem cell-based therapies – Despite promising results in both pre-clinical (animal models) and clinical (six Phase I and II human clinical studies) stages, Stem cells have safety, manufacturing, ethical, biological and logical concerns for successful translation into a AD drug. These concerns coupled with the failure of almost 99.5 % of clinical trial candidates in AD therapeutic area, have compelled the research community to explore for innovative therapeutic options combining neuroprotective properties and disease modifying capabilities. Exosomes derived from stem cells sources could be ideal alternative candidates, as they have the potential to nullify the concerns raised against stem cells and also function as natural drug delivery vehicles.

Stem cell derived vesicles – The revolutionary discovery of Exosome Vesicles (EVs) has shed new light on the development of disease modifying treatments for AD, owing to their potential in delivering the therapeutics agents to the brain. The ease of using EVs as natural drug delivery vehicles coupled with their ability to harbor molecular cargo as the stem cells make them excellent candidates as novel AD drugs. Mesenchymal Stem Cells (MSCs) have emerged as a significant players and offer a promising treatment for AD as a regenerative option and therapeutic gene delivery. Additionally, adipose tissue derived MSCs host neprilysin, which has an ability to clear Ab plaques.  Initially, the therapeutic efficacy of MSCs was attributed to their migratory capacity and engraftment at the target site, with the development of bio distribution and in vivo studies, it is being agreed among the scientific community that therapeutic efficacy of MSC is attributable to the paracrine effects of MSCs released EVs.

MSC-EVs possess several advantages compared to other vehicles of treatment. Firstly, EVs can be used as natural vehicles for therapeutic delivery of a variety of disease-modifying molecules to the brain due to their ability to cross the blood brain barrier. Secondly, they can be instilled as nasal spray for instance, ensuring easy administration of drugs, so that they could directly reach the brain through the olfactory route. Thus, EVs loaded with drugs, and can serve to stop/reverse and assist the revival of neurons which remains as the major road block and the reason for failure of several AD therapies. Altogether, MSC-EVs can be envisaged as the therapeutic intervention with potential to reverse/cure AD, while majority of the existing drugs offer mere symptomatic relief to slow down its progression.

Rationale for use of MSC -EV therapy for AD

In a healthy subject, Aβ is produced and maintained at a certain level owing to the balance achieved by its degradation system in the body. However, if Aβ accumulates excessively due to complex factors including genetic factors and abnormal lipid metabolism AD sets in. Neprilysin (CD10, hereinafter called NEP), a type II transmembrane metalloendopeptidase aids in the decomposition of Aβ. In AD patients, the activity NEP is reduced and as such therapeutic strategies supplementing the reduced NEP are considered effective. Human adipose derived MSCs which are enriched with NEP can be employed to both reduce and promote the clearance of Ab levels in the brain. Further, genetically modified MSCs can be conceived as an advanced model to enhance the therapeutic effect of EVs.

Exosomes may provide a way to increase the possibilities of a cell cargo to reach other places in the body and, due to their small size; they expand the “interacting surface of a cell” in relation to its volume. There are several considerations about the advantages/risks of exosomes versus stem cell therapy. Among the risks of cell therapy with stem cells are negative tumor modulation, malignant transformation, and obstruction of small vessels. Some of the advantages of EV therapy are low immunogenicity, no vascular obstructive effect and permeability through BBB. A brief outline of development of stem cell exosomes is potrayed in the picture to the left. Three important aspects need to be established for conducting first-in-man trials. Quality aspects, Clinical and non-clinical requirements of the exosome formulations need to be established for registering exosomes as drug.