Therapeutic nihilism refers to the “skepticism regarding the worth of therapeutic agents especially in a particular disease”. The view that the era of modern medicine began with the introduction of the sulfonamides is supported by a standard textbook of pharmacology that refers to the years 1908-35 as being characterized by “therapeutic nihilism”. The failure of several promising drugs in the clinical trial stages led to a sense of therapeutic nihilism in big pharma about the prospects of using chemical and biologics as effective treatment modalities. Cell based therapies represent a “third wave” of therapeutics following in the wake of the “small molecule” and “biologicals” approaches. In recent years, the proof-of-concept studies using stem cell-based approaches in transgenic animal models, clinical trials in patients provide new hope to develop stem cell-based therapies for the effective treatment of various diseases that were hitherto classified under therapeutic nihilism. 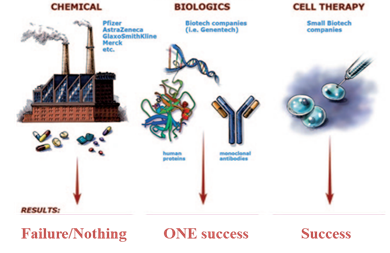 While there remains “hope” that stem cell based therapies will be effective in treating various diseases, there is also an excess of “hype”. Whenever the term “stem cells” surfaces, it often incites unrealistic expectations among patients, their caregivers and families, and the press. In this age of social media, patients and their families become easy targets for easier exploitation by many a shady group claiming to be providing the service with no credible research backing. Often times, patient desperation and hyping of stem cells has led to “stem cell tourism” where patients and families often travel overseas spending thousands of dollars for expensive treatments. The patients and their families are ill-informed about the risk of seeking treatment from unscrupulous operators. We at Transcell, strongly believe in the adage “patient first” and strive unrelentingly to uphold the highest standards in stem cell harvesting, culturing, clinical handling and cryopreserving for the intended applications. In the current issue of Transcomm, our aim is to educate the general public and clinicians alike about the regenerative and reparative capabilities of stem cells and how they can in the near future be a source of optimism in therapeutic nihilism.

Multiple sclerosis (MS) is an autoimmune disease which leads to demyelination that is disruption of the myelin sheath insulating nerve cells in the spinal cord and brain. Depending upon the area where there is loss of neurons, this condition can lead to paralysis, loss of vision, vertigo, muscle spasticity, painful involuntary muscle contractions etc. In a randomized study patients diagnosed with relapsing-remitting (RR) MS underwent an autologous Peripheral blood stem cell transplant (PBSCT) and this treatment was compared with FDA approved standard of care (i.e. natalizumab). The stem cells transplanted did show the ability to immunomodulate, it reduced the amount of Th1 and Th17 cells and normalized the amount of Treg cells and ensured a longer period of remission as opposed to the patients receiving the standard treatment. In another similar 3 year study patients with relapsing-remitting (RR) multiple sclerosis (MS) who had  previously received standard treatment and showed no improvement received  high-dose immunosuppressive therapy (HDIT) along with autologous hematopoietic cell transplant (HCT) and showed improved neurological function, disease functional scores and quality of life.

Cerebral palsy is used to describe a set of neurological disorders which leads to loss or impairment of muscle movement. It appears early in childhood and it leads to muscle weakness, tremors and stiffness. In 2015 a report was published where in 40 patients were administered with autologous bone marrow mononuclear cells and 6 months post treatment 95% of the group should a definitive improvement in locomotory functions. On comparing the pre- and postscans, it was observed that the metabolism in areas such as frontal, temporal, parietal, basal ganglia, thalamus, and cerebellum had increased. There was a significant association observed between the symptomatic improvements and cell therapy, thus confirming that these cells were capable of reducing the degree of impairment and did potentially improve the quality of life. In another study stem cells from umbilical cord blood (UCB) along with recombinant human erythropoietin was used to treat children with cerebral palsy. The erythropoietin was used to improve the efficacy of the cord blood stem cells and also for its neurotrophic ability. Six months post treatment, a clear improvement was observed in the motor and cognitive function of the patients accompanied by structural and metabolic changes in the brain.

Alzheimer’s is a chronic neurodegenerative disorder which primarily leads to dysfunction in behavior, memory and ones thinking ability. Dr. Duk L. Na from Samsung Medical Center. Korea has completed a Phase I trial where in the safety and the efficacy of Neurostem®-AD (human umbilical cord blood derived mesenchymal stem cells) was evaluated. Human umbilical cord blood derived mesenchymal stem cells were selected due to their regenerative ability, paracrine effect on the microenvironment and immunomodulatory characteristics. Very recently the Ageless Regenerative Institute, USA has begun a phase II multi-center study trial to check the safety and effects of autologous adipose-derived stromal cells in patients with Alzheimer’s disease.

Autism is a complex lifelong neurodevelopmental spectrum disorder, it hampers the ability of the person to function or interact with other people. It affects every individual in a unique way and to a unique degree. In 2013 a phase I/II trial was conducted where in a group of autistic children were infused with a combination of human cord blood mononuclear cells (CBMNCs) and umbilical cord-derived mesenchymal stem cells (UCMSCs).

Around 37 individuals were registered for this phase and the Childhood Autism Rating Scale (CARS), Clinical Global Impression (CGI) scale and Aberrant Behavior Checklist (ABC) were adopted to assess the treatment. Post treatment, statistically significant differences were observed in the CARS, ABC scores and a considerable amount of behavioral changes were also observed too. In this study, the combination of CBMNCs and UCMSCs showed larger therapeutic effect than just the treatment with CBMNCs. Another group organized a Phase II trial wherein bone marrow mononuclear cells (BMMNCs) were transplanted in a group of patients out of which 91% showed an improved disorder score and a marked difference with statistical significance between the pre and post scores with very few cases of adverse events.

Diabetes mellitus is a metabolic disorder, which occurs when there is prolonged high blood sugar levels either due to insufficient insulin production or when the surrounding cells of the body are unresponsive to insulin. A study was conducted where in a group of people who had previously been treated for diabetes, and were still dependent on a high dose of insulin were selected for a stem cell transplant. Autologous bone marrow-derived stem cells were transfused in the individuals twice in 12 weeks. Post treatment, 82% of the individuals observed a reduction in their insulin requirement. ABMSCT did result in a significant decrease in the insulin dose requirement along with an improvement in the stimulated C-peptide levels.